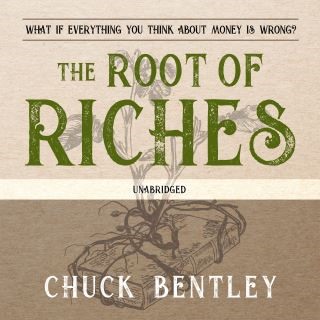 The Root of Riches

What if Everything You Think About Money Is Wrong?

In a culture driven by having and getting, our definition of “riches” has become grossly distorted.

For many, “being rich” could be defined simply as the accumulation of money. For others, it has become the ultimate goal of life. CEO of Crown Financial Ministries, Chuck Bentley, writes of his own life, admitting, “the desire to be rich…grew beyond a mere financial goal; it became a status and an identity that I hungered to achieve. Although my relentless pursuit of it eventually drove me to the brink of financial ruin and beyond, I could not rest until it was mine.”

But what does God say about “riches”? If we are living on his terms, what should we be striving to accumulate?

The Root of Riches holds a mirror to the listener, encouraging an honest look into the core values of our lives. Through his honest reflection, Bentley invites listeners into his own journey, to learn from his mistakes, and to soak in Truth that God tells us about “being rich.”

Chuck Bentley: CHUCK BENTLEY is a graduate of Baylor University and the CEO of Crown Financial Ministries. He has traveled throughout the world teaching biblical financial principles to the affluent, middle class, poor, and ultra poor. He is the author of four books, including his most recent: The Worst Financial Mistakes in the Bible, And How You an Avoid Them. He is also executive director of the God Provides Film Learning Experience. These films are now in thirty languages with the potential to reach two billion oral and visual learners. Chuck and his wife, Ann, have been married since 1978 and have four sons and four grandchildren.